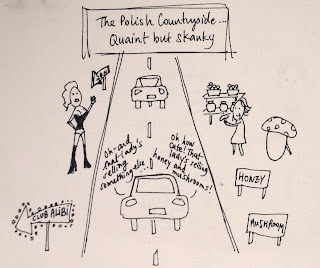 (click to enlarge)
I realized that as I was trying to draw cars for this strip. This is probably my third or fourth attempt, and it still came out flat. Anyway! Peu importe.

So my parents and I went to Poland for the weekend. We spent one night in Poznan, which apparently is the third biggest city in Poland. It was a short little trip, but it was great to get out of the city and see something different for a change. The weather was awesome throughout the trip, the leaves were changing colour and and starting to fall, and the food was fantastic.

But yes. One thing we found out about driving in the countryside in Poland is that the road is lined on one hand with quaint little mushroom/honey/eel vendors and skankily-clad prostitutes and shady-looking night clubs on the other. It was such a hilariously unforgettable sight.

Anyway. Unfortunately, I didn't do anything for Halloween this year, so I'm just going to cry and watch this video. "Wouldn't you like to four score with me?"

One year, I'm going to dress up as sexy Abraham Lincoln. One year.
Posted by mottekurunoda at 7:43 PM 2 comments:

Just home from school. I'm having a little coffee-and-blog time before I start working on some translation.

In the evening, some friends and I are going out for dinner and drinks because our friend Leia is going back to Israel this weekend. And I've somehow become the designated "organizer" of our group of friends, so I emailed, phoned, made reservations, emailed again, and bought a little gift and a card. I'm actually not very good at organizing---I recently helped organize a good-bye party where I almost left behind the person for whom we were having the party. And yet, people don't learn. So yes. Let's just hope things work out today.

And the comic is kind of unrelated . . . but whenever I mention a pop-culture trivia, I realize that it all comes from Marlowe. I have no idea how he manages to store all this information in his head, but he fed me so much comic book/film/literature/music trivia throughout the years that I can safely say that 95% of my pop-culture trivia comes from him. (I also only managed to retain about 25% of what he told me.) 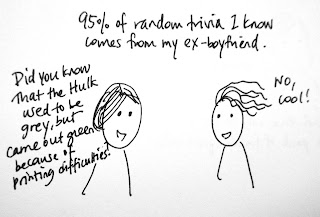 So yes, the next time I start my sentence with "Did you know . . .," you know what my source is.
Posted by mottekurunoda at 1:57 PM No comments:

"Pet peeve" is a funny word. 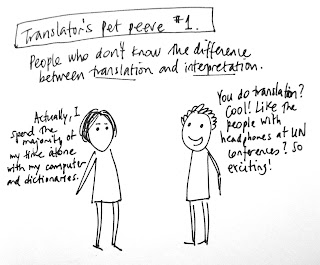 Thanks to J, I have work again! Onwards and upwards!
Posted by mottekurunoda at 5:57 PM No comments:

I'm on a posting spree!

I just came back from a fun and inspiring talk about Tove Jansson--the author of the Moomin books. Did you know that Moomin achieved worldwide fame after the animated series aired in Japan? Unfortunately Jansson herself didn't have too much to do with it---by then (70s or so), she was kind of tired of the fame and demanding work schedule, so she'd let her brother take over. He ended up continuing the Moomin comic strips for 16 years---much longer than Jansson herself (7 years).

Anyway. For Jansson and other artists and writers, working from home is the best way to have a non-existent social life. This goes for us translators as well.

According to Alex Noriega, one of my favourite online comic artists, this is freelancing: 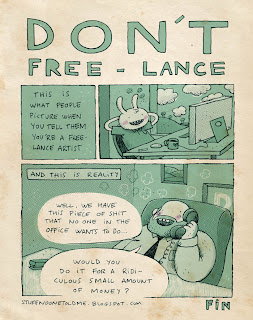 (http://stuffnoonetoldme.blogspot.com/)
Also check out Matthew Inman's (of the famous Oatmeal comics) comic on 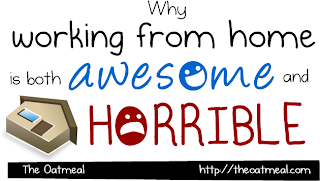 (http://theoatmeal.com/comics/working_home)
It pretty much says it all.
In other words, I need to find a part-time job that gets me outside of the house.
Posted by mottekurunoda at 10:02 PM No comments:

Being "tall" is relative.

(click to enlarge)
Having been considered "on the short side" throughout university in Canada, I was pleasantly surprised when people in Japan thought I was pretty tall. People (usually old people, though) would actually use the adjective "tall" to describe me. It was really awesome . . . until I had to go buy shoes. Size 8 (about 25 cm in Japan), which I thought was pretty average, apparently is kind of big in Japan. I always got sent to the opposite side of the department store where they had "big" sizes and less variety, which kind of sucked. And then of course, Germany. Here, I'm just downright short. And when I borrowed my friend's girlfriend's bicycle in Denmark, I could barely touch the ground with my tippy toes with the seat lowered as far as possible.

Similarly, having a "high" tolerance is also relative . . . but that's for another day.
Posted by mottekurunoda at 3:40 PM 2 comments:

One of the things I was bracing myself for when I moved back to Japan last year was its notoriously fascist garbage collection system.

The thing is, you can get used to anything. After a while, I didn't even have to look at my calender to know if it was Monday (combustibles) or the second Tuesday of the month (plastic bottles). I got really good at washing, cutting, and drying the milk and juice cartons quickly. I think they'd even reduced the number of categories in the last few years, so it was slightly easier than the last time I had been so traumatized and overwhelmed by its complexity. Eventually, I even moved into an apartment that had its own garbage room so I didn't have to deal with this 8:00 business . . . before that, I'd often wake to the sound of the garbage truck leaving, and think to myself, "Crap. I guess I'll have to live with my stinky garbage for another 3 days."

Anyway. I could probably go on forever, but homework's a-callin'.

**
Oh, also. This is unrelated to garbage, but ain't it the truth: Printers Were Sent from Hell to Make Us Miserable.
Posted by mottekurunoda at 4:32 PM No comments:

My parents are fighting. Nobody is apologizing, and I'm tired of being stuck in the middle, and hence I am blogging. Way for me to be a good daughter.

Speaking of apologetic, the Japanese are thought to be pretty apologetic people. On top of that, my three years spent with notoriously-polite Canadians (and dating one for 4.5 years) have only amplified my redundant nicety. I actually hadn't noticed this quality until my friends in Berlin started to point it out recently.

Monday! I'm finally going back to school starting tomorrow. This last week has been amazingly relaxing due to no school and work, but it's nice to be getting back into a routine again. I'm refueled with energy, and now that I have this blog, I have the motivation to keep drawing (and procrastinating . . . creatively).

Anyway. I burned my fingers yesterday by stupidly touching a light bulb when it was still hot, and as I rummaged through the freezer for some ice, I found the perfect remedy: 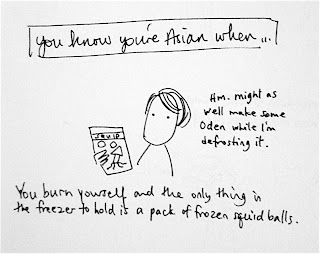 Basically, this is the recipe for a surrealist poem.

(click for full view)
Fun.
Posted by mottekurunoda at 9:05 PM No comments:

I don't know anything about Byzantine art, so I asked AR what made her decide to do her Masters in Byzantine art. 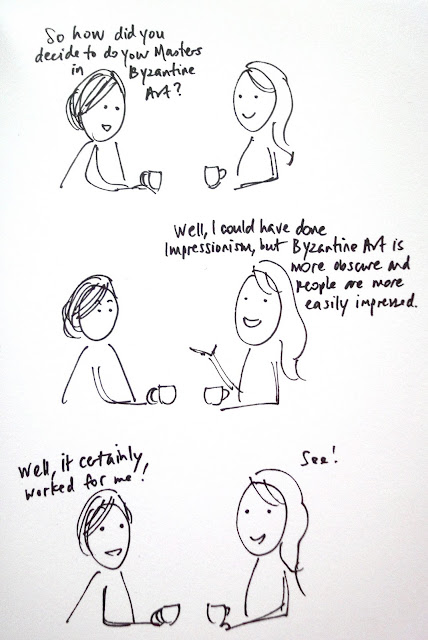 She's just being modest, but she's still got a good point.
Posted by mottekurunoda at 4:44 PM No comments:

I'd always taken one of my classmates to be at least 30 years old, but I recently found out through Facebook that she's actually younger than me (ie. 23!). 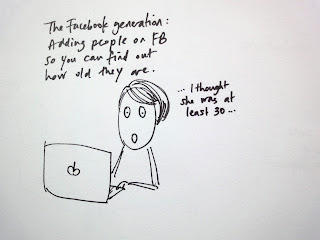 The thing is, I'm positive she was surprised to learn that I wasn't 17. heh.
Posted by mottekurunoda at 12:08 AM No comments:

I had the weirdest dream last night where I was running at full speed to the airport to catch a flight that was leaving in 30 minutes. I always find it strange when people say they can't remember or they don't have dreams--my mom and I always have the strangest dreams, and generally remember them. But my mom though---it seems that her digestive system is somehow connected to her brain: 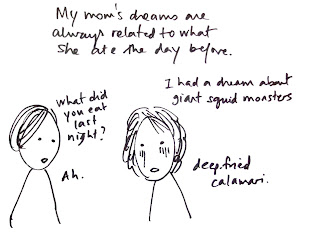 When her dreams are food-related, they're usually nightmares.
Posted by mottekurunoda at 10:16 PM No comments:

So here's an attempt at reviving my childhood dream of becoming a cartoonist. The Internet has made it easier for me to share silly drawings I've made in my free time, so yes. Here's hoping this blog lasts for more than 3 days.
So far everything I've been drawing have been based on my own life, ie. this conversation I had with AR the other day: 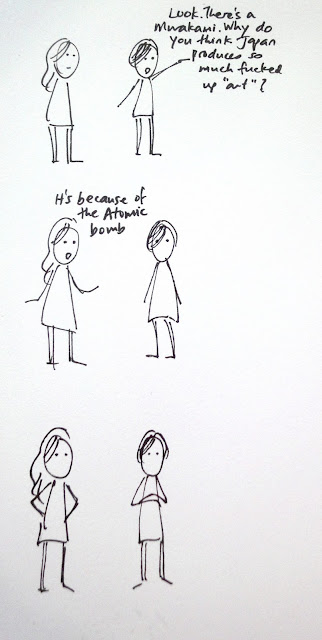 On that note, I should probably go check on that chocolate cake. Yes, Nozomi baking, that's a first!

Posted by mottekurunoda at 12:45 PM 4 comments: