After I got home from school, I spent about three hours in the afternoon working on my monster mugs. I will post photos once they're fired!

So yes. I'll start posting the Creepy Neighbors series now that I've stocked up a few strips. They're based on the neighbors we had back when I lived in Toronto and particularly centered on the creepiest of them all, Moses. Moses was a hairy guy in his 40s who lived directly next door to us. We weren't ever exactly sure what he did, but he claimed that he was working in music, "doing his own thing." It sounded pretty questionable, but we didn't want to ask about it. When he wasn't playing guitar, he would usually be found by the entrance of our building smoking weed. He was harmless and generally polite, but unfortunately, you can be perfectly polite and still be very creepy. So yes. At first, I tried to avoid being caught in an awkward one-on-one situation with him as much as possible, but unfortunately, I was eventually forced to be formally introduced to him at the laundromat. 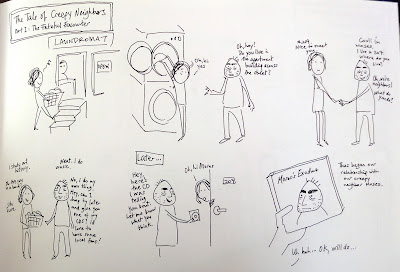 (click to enlarge)
To be continued.
Posted by mottekurunoda at 6:04 PM