People are weird. I don't need daily facebook updates on your gross-looking swollen eye or infections brought on by exotic insects. Really. Sharing deformities must be a guy thing or something.

Engrish is a beautiful thing. Even though it pisses me off occasionally, I've learned to accept it as an accidentally comedic part of my heritage. Japanese product names are fantastic. Take Mosburger, for example. What the hell is mos? Or moss, like the green stuff that grows on rocks? Kate Moss? Mossolini? (ok, I'll stop.) I'm a huge fan of Mosburger (it is--hands down--the best burger chain in the world), but I still have no idea where "mos" came from. Or the famous Calpis drink, which had to be exported as Calpico because it sounded too much like "cow piss." 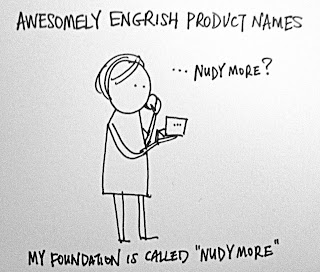 I was thinking about this because I was looking at my foundation package. Nudymore. First of all, what is nudy? Is that an adjective, like "That party was totally nudy," or is it a noun, like "This beach is full of nudies"? Actually, the more I say the word, the more I actually want to use this word on a regular basis. Anyway, whatever nudy is, there's apparently more of it in this product.

Well, this is what I envision when I hear "Nudymore": 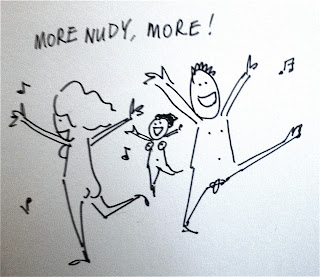