A colour post after having ranted about colour in my last post. It's coloured pencil, so it doesn't really count.

So I went to my friend F's birthday-slash-Karneval party the other day. Karneval party implies costume party---so it's as close as the Germans get to Halloween (completely different concept, yes, but yay costumes!). I wanted something easy and cheap but also recognizable, so yes. This is what happened. 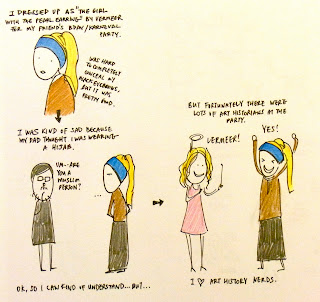 The theme of the party was actually "heroes from our childhood," so my costume didn't exactly go with the theme (unless I wanted to argue that Vermeer was my childhood hero, which probably would have made me one of those obnoxiously precocious kids), but thanks to the presence of many like-minded art nerds, I had fun being recognized (except I had to do the neck-twisty-pose every time)...until I started to lose track of how much wine I was drinking. It literally took me 24 hours to recover from my hangover the next day. Ugh.

I also think I lost one pearl earring at the party. Damn. I guess that made it even closer to the original, seeing as the only mention the single earring. Except I somehow doubt that Vermeer's model was a drunken mess. I just pray that I didn't do anything too stupid . . .