Feeling much better after antibiotics and painkillers. Ah, modern medicine. I guess it will be a day of catching up on some drawing.

I had a really weird and slightly depressing dream last night. I had made an appointment with some important art professors to get feedback on my portfolio, so I had to take a taxi to Roppongi (central Tokyo). But when I got there, I found that I was on some tropical beach. I had to spread out my artwork on a beach towel. Everyone said the portfolio wasn't good enough. My friend A.Roy was there, consoling me. And then we all decided to go to a costume party by the beach. I can't remember what I was wearing, but someone was dressed up as one of the little GI Joe soldiers from Toy Story. And then a different friend A took me down to meet another artist, but the only way to get to his atelier was down a chute with wooden chairs nailed to the sides as footing. The guy was supertall and friendly. He took us to a gallery where they were selling a feather--a single, normal, possibly even pigeon feather--for 6,500 dollars. He kept saying that it was the best conceptual art piece he'd ever seen and how much he wanted to buy it. My friend and I just kind of looked at each other.

And then I woke up. Mostly, I was sad that they didn't like my stuff.

I've been trying to stay away from Facebook lately. I know I can't really do without it so I won't cancel my account, but I'm trying to keep myself from posting too much on it. But I do check out photos regularly and I realized that in the last year or two, the amount of wedding/engagement/baby photos have practically tripled. And I do enjoy looking at them because people generally look happy in them! And I enjoy photos of funny-looking (I mean adorable!) babies. 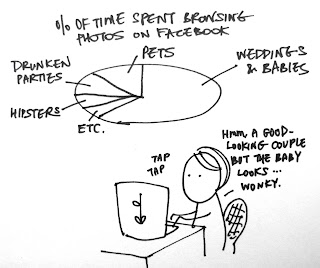 Hm, I apparently can't draw straight lines. Or cane chairs. It looks like I have a beaver tail. Meh.
Posted by mottekurunoda at 11:25 AM