Argh! This was meant to be a September 30 post, but I'm an hour late! Schade. I was at G's parents' house making gyoza with him for G's parents, sister and her boyfriend . . . and they were excellent! We made a batch of vegan gyoza, which also turned out pretty well. Also, I think I have a thing for men in aprons. Hot.

Right. Onto the totally unrelated comic. It was inspired by an article about terrible translations of film titles that I found via the ICoFF Twitter account: 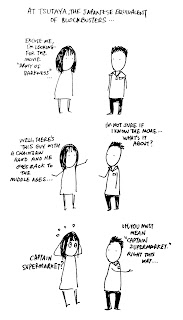 It's almost impossible to look for a foreign film by yourself in a Japanese video store if you don't know the title in Japanese. (Unless it's something like E.T. where the title stays the same.) I learned quickly to look up the Japanese title before going to the store, but if I'd forgotten to, I'd find myself trying to explain the synopsis of the film to the poor employee as he/she tried to guess what film it might be.

Right. Off to bed, and then another weekend of intensive art classes (and for G intensive law classes)!
Posted by mottekurunoda at 1:08 AM