I can't believe we've got 11.5 hours left of this year. I'm still in denial. Unnnghhh. Then again, I'm just so glad that this crazy Christmas-New-Years-end-of-year-parade-of-family-guests-one-after-another 年末年始 hecticness is coming to an end.

In keeping with my resolution to spend a quiet Silvester this year (though I won't be curling up at home alone as I initially planned), I will be doing something small with G and (maybe) keeping the drinking to a minimum.

Speaking of the end of the year, you know what happened in Samoa yesterday? They jumped forward in time by a day in order to better coordinate business hours with Australia and New Zealand (Samoa was previously 21 hours behind Sydney), which meant that they went directly from Dec 29 to Dec 31. Weird! But cool.
Read more about it here on BBC.

I told my dad about that and apparently he's actually been to both Samoa and American Samoa. Coooool.

On an entirely separate note (I'm always too lazy to do season-appropriate comics. I'll probably end up posting something Christmas-related in the summer.): teddy bears! 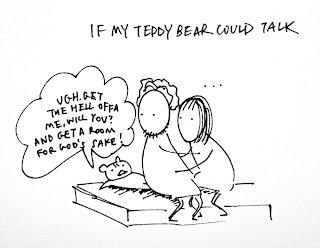 Have an awesome New Year's Eve, and see you tomorrow!
Posted by mottekurunoda at 12:23 PM