Coming to you from G's parents' house in Bremen! Bremen is a super cute green city with beautiful buildings and delicious and cheap Hachez chocolate. I've been on an intense eating and German-speaking spree (or listening, rather; it takes me way too long to understand and react that by the time I actually go to say something, I'm already two conversation topics behind. My brain is on fire. I hope they don't think I'm slow. I keep thinking about how much quicker I would be to understand jokes and to make comments if it were in English and wanting to say, "I'm really not as stupid as I look!". I'm just too self-conscious. Anyway, in conclusion: my German needs serious work!)

But yes. I've been offline for three whole days and I had been coping with Internet-less-ness surprisingly well until I started thinking about my blog last night. It's okay if I take a 3-day break from my blog. But I get antsy. Hence I've shooed G out of the room (I really can't write when people are watching) for this frantic update.

Anyway. This is a little cartoon I drew last week about the time I went to a Slipknot concert (nb: I'm not a metal fan) with R, W, and B when we were 19. R lost his glasses lens in the mosh pit and we spent a good half an hour or so walking around the empty venue looking for his lens. There were at least half a dozen other people doing the same thing as us. Haha. 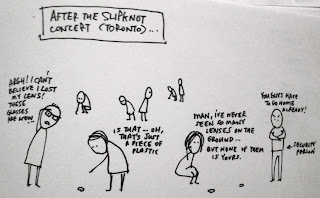 Long-awaited Lange Nacht der Museen tonight in Bremen! Also going running in an hour, and I'm shocked to find myself really excited about it.
Posted by mottekurunoda at 12:07 PM