The Crazies of Kensington

Spent a long time at the doctor's office with my mom today. While sitting around in the waiting room watching the motion sensor lights go on and off (for no reason. There is enough light in the room. I'm convinced it's just there to distract the patients.), I started to think about the really eccentric people who lived (and probably still live) in Kensington Market in Toronto. The three that immediately came to mind were these: 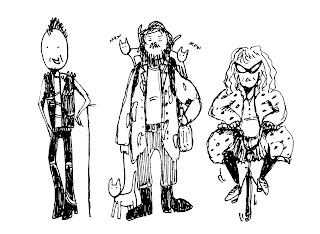 First is the middle-aged Green Mohawk Guy. He was probably the nicest of the three (this is based on the fact that he said hi (or otherwise acknowledged her existence) when Z said hi). He usually hung around on the corner of Augusta and Baldwin with some other buddies. I'm not sure how old he is or what he does, but there was an air about him that seemed to me like he owned that corner of Kensington.  Badass but relatively approachable.

And then there's the Cat Man. Also middle-aged, but he was a little less approachable than GMG, mostly because he usually walked around the market yelling at people or grumbling incoherently to himself. He always wore a giant backpack, on which two or three leashed cats sat napping. The idea of a man walking around with cats on leashes is cute . . . but I generally tried to stay out of his way.

Finally, there's the Bicycle Lady. She had floofy blonde hair, pointy sunglasses, and a polka-dotted fur coat and rode around the market on a tiny bicycle. She yelled at my mom for staring at her once. (Fair enough; my mom has a tendency to ogle.) Slightly aggressive, but generally harmless, methinks.

I imagine Kensington's already changed a lot in the last three years, but I'd like to go back one day . . .
Posted by mottekurunoda at 9:41 PM