Comic to come this evening, but just a quick update to share with you the AWESOMEST blog out there: http://chickswithstevebuscemeyes.tumblr.com/

I got this via some friends on Facebook, and the title pretty much says it all. It's a blog full of photos of chicks with Steve Buscemi eyes photoshopped on them. I don't know about you, but something about Steve Buscemi is magical. How can you look so creepy and so endearing (and even vaguely attractive) at the same time? I watched Con Air as a kid and the only thing I can tell you about the film is that that was my first contact with Steve Buscemi. (I just wiki'd it . . . how did I NOT know that Nick Cage, John Cusack, AND John Malkovich were in it? I mean, not that that makes it a good movie or anything.) Actually, I didn't know who he was then, but I recognized his superfreaky eyes (I was slightly traumatized from his role in Con Air) immediately when I saw him in other films, and kind of became a small-time fan. Honestly, though, how could you not love him in Paris je t'aime? Creepy but endearing.

And the blog is so awesome, it even gives you a DIY Steve Buscemeye-ifyer. 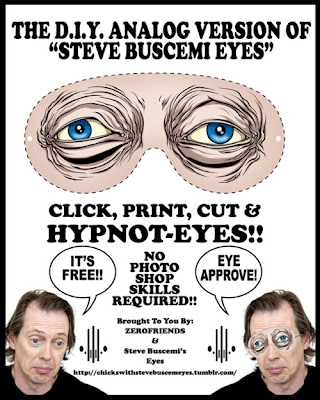 Wow. Who knew I had so much to say about Steve Buscemi? Anyway, comic coming up later, maybe after the Barcelona x Madrid game.
Posted by mottekurunoda at 5:04 PM